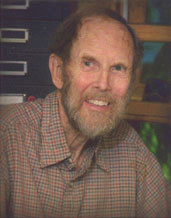 Bill Binzen was a “man of parts” (as he might have put it) whose varied and interesting life experiences – from prep school student to cowboy, from pilot to children’s book author – combined with a whimsical approach to life and friendly manner made him entertaining company.  More than anything else, though, he was an artist – photographer, sketcher, painter, sculptor – whose creative and discerning eye made art out of found objects, twigs in snow, “sandwiching” photographs (long before Photoshop was invented), or the perfectly balanced framing of a scene in nature.  “I find it very hard to describe what I’m looking for when I look through my camera lens,” he said, “but I do know that it has everything to do with balanced composition and subtle mood.  When those are right, the picture makes itself.”

F. William Binzen was born on September 21, 1918 in Montclair, New Jersey, to Frederick William and Lucy Husted Binzen.  Bill was the eldest of three sons who were all the greatest of friends.  They were lucky to grow up almost untouched by the Great Depression, as their father was a lifelong J.C. Penney executive.  Their childhoods were full of sports and games with their neighborhood pals, and equally happy summers spent often in the Lakeville, Connecticut area.

Bill, however, did not follow his father into business.  In fact, it took a while before he found his true calling of photographer in his forties.  Although he was a lifelong curious learner and great reader, academics were not his strong suit; after graduating from The Choate School (where he held the record for the high jump, in part thanks to his tall lanky frame, and was co-captain of the track team), he attended the University of Virginia for one year before deciding it was not for him.  Instead, he studied art at the University of Arizona for a while.

Bill was working as a tour guide at Radio City Music Hall in New York City (happily returning the greetings of the ever gracious performer Dinah Shore) when, on break one day in the teletype room, the news came over the wires that Pearl Harbor had been bombed.  Bill’s initial attempts to enlist were thwarted by his always slender build; he didn’t weigh enough to qualify for the army.  To put on some pounds, he headed west to Jackson Hole, Wyoming where he worked as a cowhand at the Triangle X Ranch for nine months.  Long days riding the range in a Western saddle were followed by ample meals, and he put on enough weight to qualify for the Army Air Corps, where he trained to be a B17 bomber pilot. 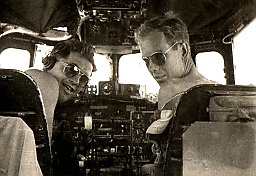 A pilot in the 15th Air Force, he was stationed in Italy and flew 26 bombing missions over Germany and Italy.  Among his great flight crew was radioman Norman Lear, who became a lifelong friend.  When the war was over, he traveled north in Italy to meet up with his brother Peter, who had been fighting in the Alps as part of the 10th Mountain Division.

Back in New York after the war, Bill studied at the Arts Students League, a formative experience he always remembered fondly.  He became a lifelong member of the League, and carried its card in his wallet until the day he died.  He soon embarked on two careers at which he excelled: father, when his son William was born, and Art Director, when he started working in advertising.  For most of the 1950s, he worked at Ogilvy Benson & Mather for the legendary David Ogilvy, and handled such accounts as Schweppes, Hathaway, and the government of Puerto Rico.  He enjoyed the creative aspects of the job and the camaraderie (including getting to know advertising copywriter Gaile Longden, whom he married in 1959), but the job began to hold less fascination for him, and his artistic pursuits more, so in 1959 he and his new wife went to live in Florence, Italy for a sabbatical year.  “It was a wonderful experience,” he said of that year, “and I did a great deal of drawing and photography during that second sojourn in Italy.”

He returned to Ogilvy for two years, and then in 1962 began his true career as a freelance photographer.  Over the years, he worked for a variety of magazines – Life, McCall’s, Esquire, Psychology Today (where he often employed his technique of “sandwiching” two transparencies to get an interesting effect), Time, Holiday, Fortune, the New York Times Magazine, and Parents – for the latter often pressing his growing family – daughter Susanna and sons Timothy and Nathaniel – into action modeling for assignments.  Even more often, however, the children (and family pets) were unknowing subjects of informal photos, caught playing or reading or in other unstaged pursuits. (These were sometimes also turned into books, such as The Rory Story.)

The family lived during the 1960s on 10th Street in New York’s East Village.  The neighborhood abounded with interesting material for photos; as Bill wrote, “There was never a dull moment in those ‘Flower Power’ days!”  Some of this material was turned into two books for children and one (Tenth Street) for adults.

In 1970 Bill and his family moved to Salisbury, Connecticut.  Bill traveled frequently to New York for assignments, but this was more than balanced by the pleasure of living in the beautiful Berkshires, which became both subject of and backdrop to many wonderful photographs and books.  Altogether, he wrote and illustrated with his photographs eleven children’s books and three books for adults.  (His first book, however – Little Will the Bugle Boy – was illustrated with his drawings and came out of the Florence experience.)  Creating books gave him more satisfaction than anything else, and even when he was no longer publishing books, he made “mock ups” of his new ideas and many small one-off books written and illustrated specifically for his fortunate grandchildren.  Of all his children’s books, the most beloved may well be Alfred the Little Bear and its two sequels; he often received letters from both adults and children who loved Alfred.

Bill never retired from photography; even when he was no longer doing assignments, he worked with his vast catalogue of photos on new projects, and even managed a (limited) mastery of the computer and digital camera, and was working on assembling a collection of his best works when he died.

Bill was inspired continually by the people and landscapes of his beloved Northwest Corner.  He served on the Democratic Town Committee, the Salisbury Association Historical Society (where he was very involved in putting together the World War II exhibit several years ago), and the Board of Christian Action of the Salisbury Congregational Church.  He was also a member of the American Society of Magazine Photographers and the Society of Illustrators in New York.