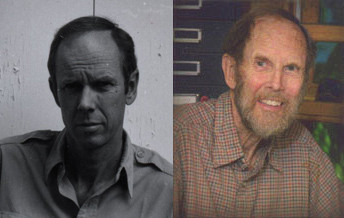 Bill Binzen (1918-2010) was a photographer of people and nature, whimsy and pathos, most active from the 1960s to the ’90s. After a career as an art director for the advertising agency Ogilvy and Mather in the 1950s, he took his leave from the world of “Mad Men" in about what would have been its third season, heading instead into full immersion in the world of the photographic image, never to look back. Binzen established himself as a commercial and magazine photographer, author of more than a dozen children’s books, and an artist. His work appeared in magazines such as Life, Esquire, Psychology Today, Sports Illustrated, Time, Holiday, Fortune, the New York Times Magazine, and Parents, as well as in advertising, calendars and cards. Central to his photographic work are collections from New York City in the ’60s, rural New England, and Tuscany; evocative character studies; and experimentation, such as with “doubles” (sandwiching two slides together, pre-Photoshop). Characteristic of his style is great attention to composition and the evocation of mood. As we progress into the 21st century mode of photography – crisp, perfected, and ubiquitous – this World War II aviator’s photography carries a strong imprint of its pure 20th-century roots, centered in the 1960s and ’70s.